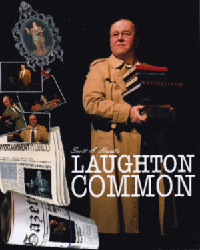 When Scott was told he looked a lot like British stage and film actor Charles Laughton he set out to find out if that was true. What he found was that they not only looked alike but they also had a lot-in-common! Scott is an accomplished actor, singer, director and educator and he will be presenting his one-man play that is sure to entertain and enlighten.