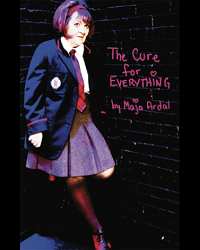 The Cure for Everything

We are thrilled to have the very talented Maja Ardal joining our festival. She is an Iceland-born Canadian and was schooled in Scotland. Maja is an accomplished playwright, performer, theatre instructor, director, and the former artistic director of Young People's Theatre. In her one-woman show she plays Elsa, a typical fifteen-year-old growing up in the early 1960s. Her world revolves around independence, boys, and being popular at school, despite growing concerns surrounding the Cuban missile crisis. In fact, this is Elsa's opportunity to let loose before the world blows up!