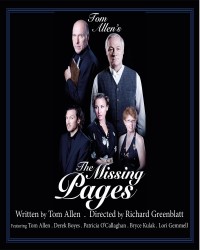 × On December 16, 1925, Theodore Molt became the sole Canadian to meet Ludwig van Beethoven, but what could have happened between the two men? After Molt's florid greeting in one of Betthoven's notebooks, the following four pages were violently ripped out and destroyed. Betrayal? Competition? Scandal? Or just old fashioned ego and pride? With music, song drama, history and informed speculation, The Missing Pages investigates.